Yesterday I did Needles Highway (SD-87) from North to South. I went to sleep frustrated because I took my GoPro HERO 7 Black with me but I wasn’t prepared for this last minute route.

So after a good night’s sleep, I decided to thread that needle again. This time I went from South to North, since I wanted to swing through Sturgis Harley-Davidson. Since my right highway peg disappeared, pretty sure someone swiped it. So things sort of fell into place.

This time I took some time to prepare. Now that the RAM Offset Reservoir Cover Ball Base is gone (see a previous post where it caused leaks), and I never bought the RAM Ball Adapter for GoPro Base (didn’t seem secure enough), I had to come up with a way to mount the GoPro.

I had to swap my iPhone for the GoPro, since both use RAM Mounts stuff. I had to move the GoPro Rail Base that I used to mount the iPhone (to the bottom of the ape hanger) to near the top of the ape hanger. I used my favorite RAM Composite Double Socket Swivel & Ratchet Arm, to position the GoPro.

I took a few minutes to level the GoPro, and to tweak the settings to get a decent 1080p by 60fps by 16:9 video resolution, enable SuperView, and enable HyperSmooth. I am powering the GoPro off of a Goal Zero Venture 70 Recharger (buddy recommended) using a X~PWR-H5 48″ All-Weather External Power Kit to make the kit weather proof.

The five videos total around 8gb, but for this blog I trimmed it down to three clips, one clip per tunnel.

To give you an idea how incredibly narrow these tunnels are, take a look at this video that showcases the talent of these bus drivers.

I was going to go to Sturgis today but figured I’d just be watching a bunch of bikers drinking. Myea. Nope. Didn’t come here for that.

Went to grab a bite and got pinged by someone following my blog. He recommended Needles Highway, or SD-87. Wow am I glad I checked it out.

Didn’t get much of a chance to take pictures of the three *really* tight tunnels we had to go through. One was barely 8 feet wide, and two of three were single lane. All three were awesome. Here is Wikipedia shot:

On the first tunnel a mountain goat held up traffic. The nerve of the bastard, drinking water flowing across the road. The most exciting part of that was watching it jump 10′ or more up the rocks after he interrupted us.

A small group asked me if I knew how far the nearest gas station was. He was out of gas. I let him have the 30oz out of my fuel bottle since I had over 1/2 tank left, plenty to get through the ride.

After the climbing and threading the needle, stayed on 87 towards Hot Springs. I planned on camping but today ran late so cheap hope it is!

In the last few miles I ran into two Bison (figuratively speaking), ran over a chipmunk (like literally…*crunch*), and nearly hit a deer (scared it off with my pipes!). 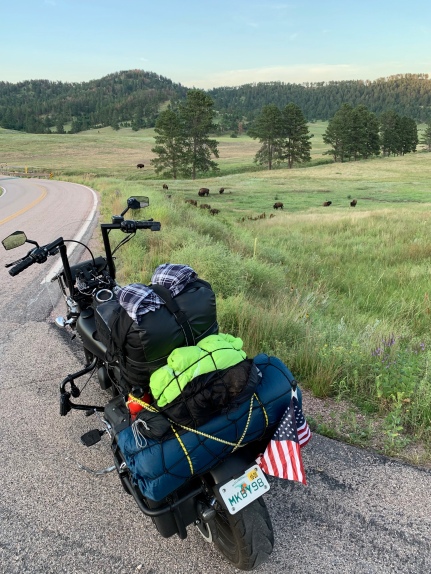 My favorite part of Needles Highway were all the rocks. These things stood up as if something nasty happened millions of years ago. I hope when the next nasty event happens, it ends human life on earth quickly. 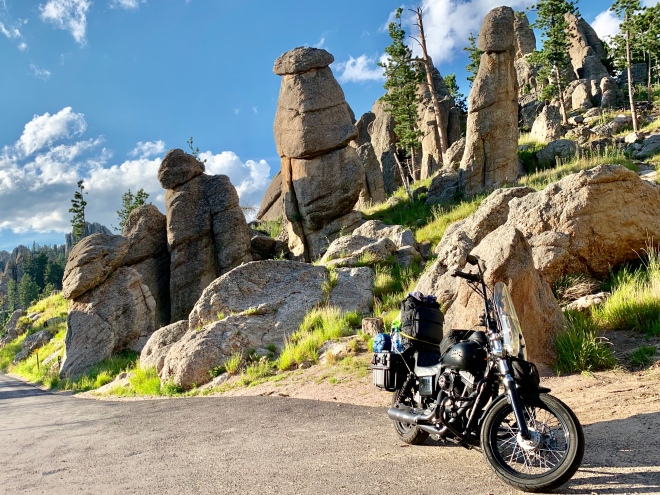 The route included what I think might be the first 240 degree turn I ever saw.