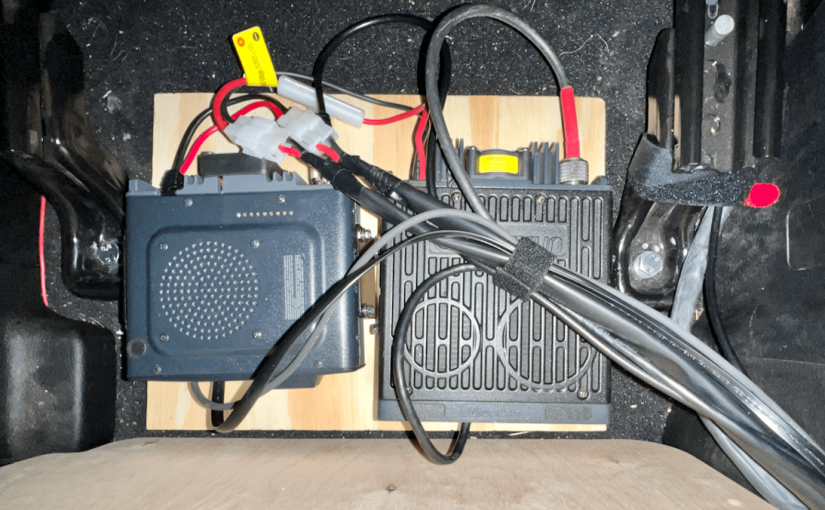 Now that I’ve got my HAM and GMRS faceplates mounted securely to a seat rail bracket bolted onto the front left passenger seat bolt, the next task on my list was to put both radio bodies in a secure and hidden location. At first I thought about mounting them in one of the Goose Gear platform cubby holes, but I decided against it since I want my recovery gear and tools to be put there.

I decided to route power for both radios to my LiFePO4 off grid battery, instead of through the firewall to the Jeep battery. This makes things so much easier. I decided there is plenty of room under the driver’s seat, back where the rear driver’s side passenger would sit if I had back seats. I didn’t realize there was so much room there. I decided to mount both radios on a piece of wood, and secure it with a 2″ piece of aluminum attached to the two rear driver seat rail bolts.

There’s plenty of room to mount the radio bodies side by side, and plenty of room on all sides of the radio, to enable cable management (power, mic, programming, and controller). There’s even enough room to insert/eject the microSD card used to back up and program the HAM radio.

Luckily I had a jigsaw with blades for all types of metals and wood. So cutting the plywood and aluminum bar was easy peasy. I used a Dremel to finish the cut sides to prevent sharp edges on the aluminum bar, and splinters on the plywood. I had plenty of stainless steel bolts of all sizes, and nylock bolts, and washers.

Once I had the 1/2″ holes drilled on the ends of the aluminum bar, and the two 3/8″ holes in the center of the wood piece, it was easy to put it all together. Mounting the radio brackets and the radios onto the brackets was a bit of a challenge (think race condition).

Once it was all assembled, I took it to the Jeep. I removed the four driver seat rail bolts, and set them to the side, since I bought M10-1.50 hardened steel bolts that were slightly longer. I placed the kit with the aluminum holes over the seat rail holes, and I put the seat rails over the aluminum bar holes. They aligned perfectly, so I put the bolts in but kept them loose.

I put the two front driver seat rail bolts in and tightened them down, then circled back to tighten down the rear bolts. I was expecting a wrestling match with some contortionism, but I was happy that things just fell into place. I slid the driver seat back and forth, plenty of room over the radios.

After finishing the wiring, I was very surprised how easy it was to do. It’s true that Goose Gear platform is the overlander’s dream come true.